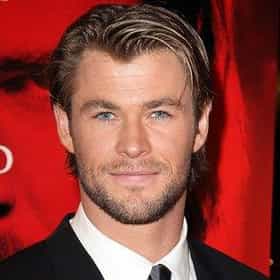 Christopher Hemsworth (born 11 August 1983) is an Australian actor. He rose to prominence playing Kim Hyde in the Australian TV series Home and Away (2004–07) before leaving to begin a film career in Hollywood. Hemsworth appeared in the science fiction action film Star Trek (2009) and the thriller adventure A Perfect Getaway (2009) before gaining positive reviews in the horror comedy The Cabin in the Woods (2012). He held starring roles in the fantasy film Snow White and the Huntsman (2012), the war film Red Dawn (2012), the action thriller film Blackhat (2015), the biographical thriller film In the Heart of the Sea (2015), and in the Men in Black film series spin-off Men in Black: ... more on Wikipedia

Chris Hemsworth is ranked on...

Chris Hemsworth is also found on...