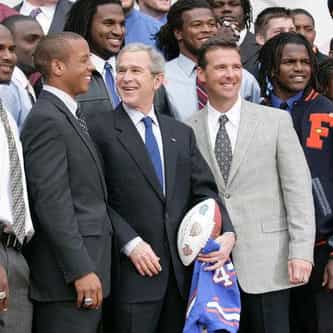 Christopher Patrick Leak (born May 3, 1985) is an American football coach and former gridiron football quarterback. He played college football for the University of Florida, and led the Florida Gators to victory in the 2007 BCS National Championship Game. Leak played professionally for the Chicago Bears of the National Football League (NFL), the Hamilton Tiger-Cats and Montreal Alouettes of the Canadian Football League (CFL), and the Jacksonville Sharks and Orlando Predators of the Arena ... more on Wikipedia

Chris Leak IS LISTED ON

cleveland browns linebackers, all time mariners team, malik from house of payne now, how to do pirate makeup for male, best point guards of all time, best riddler riddles, rock vs rap, university of illinois quarterbacks history, who stars on the big bang theory, ready or not meme