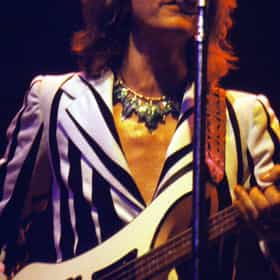 Christopher Russell Edward Squire (4 March 1948 – 27 June 2015) was an English musician, singer and songwriter best known as the bassist and a founding member of the progressive rock band Yes. He was the longest-serving original member, having remained in the band until his death and appearing on every studio album released from 1969 to 2014. Born in Kingsbury, London, Squire took an early interest in church music and sang in the local church and school choirs. After he took up the bass guitar at age sixteen, his earliest gigs were in 1964 for the Selfs, which later evolved into the Syn. In 1968, Squire formed Yes with singer Jon Anderson; he would remain the band's sole bassist for ... more on Wikipedia

Chris Squire is ranked on...

#6 of 189 The All-Time Best Rock Bassists 207.3k VOTES The best rock bassists of all time are a varied bunch, and all the best bassists in rock are on this list. From the hard roc...
#6 of 76 The Best Rock Bass Player of the 1970s 22.2k VOTES Tune up and crack your fingers because this list compiles the best rock bass players of the '70s, ranked from best to worst ...
Musicians Who Died in 2015 708.1k VIEWS This list of famous musicians who have died in 2015 is a complete list of singers, songwriters, and performers who will now ...

Chris Squire is also found on...