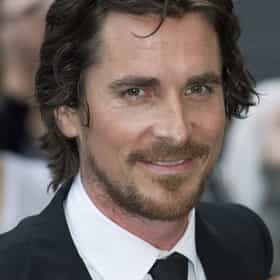 Christian Charles Philip Bale (born 30 January 1974) is a Welsh actor who is known for his intense method acting style, often transforming his body drastically for his roles. Bale is the recipient of many awards, including an Academy Award and two Golden Globes, and was featured in the Time 100 list of 2011. Born in Haverfordwest, Wales, to English parents, Bale had his first starring role at age 13 in Steven Spielberg's war film Empire of the Sun (1987). Following a decade of leading and supporting roles, including in Little Women (1994), he gained wider recognition for portraying the serial killer Patrick Bateman in American Psycho (2000). In 2004, he lost 63 pounds for his role in ... more on Wikipedia

Christian Bale is ranked on...

Christian Bale is also found on...