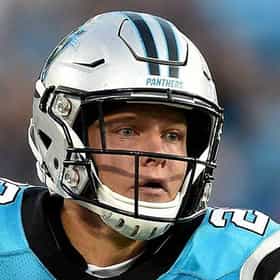 Christian Jackson McCaffrey (born June 7, 1996) is an American football running back and return specialist for the Carolina Panthers of the National Football League (NFL). He played college football at Stanford, and was drafted by the Panthers with the eighth overall pick in the 2017 NFL Draft. As a sophomore in 2015, McCaffrey was the AP College Football Player of the Year and the runner-up for the Heisman Trophy. He holds the NCAA record for most all-purpose yards in a season with 3,864. McCaffrey holds the Carolina Panthers franchise record for most receptions by any player in a single season. ... more on Wikipedia

Christian McCaffrey is ranked on...

#3 of 51 The Most Likable Active NFL Players 2.4k VOTES Are you ready for some (very nice) football! Even though football is a gritty game of tough competitors, the sport is filled...
#59 of 192 The Best NFL Running Backs of All Time 387.2k VOTES This list of top NFL running backs of all time is ranked by football fans worldwide. Who are the best NFL running backs of a...
#505 of 1,556 The Best Football Players Ever 1M VOTES One of the hot topics of debate not only among NFL fans but pundits as well is who is the best football player of all time. ...
#1 of 35 NFL Predictions: Things Most Likely To Happen During The 2019 Season 595 VOTES The New England Patriots ground down the Los Angeles Rams in a famously boring Super Bowl in February, and with the new foot...
#10 of 41 The 41 Hottest Men in the NFL 165.3k VOTES   The hottest current NFL players include some of the hottest athletes of all time that are currently playi...
#11 of 202 The All-Around Best Athletes of 2018 32.9k VOTES When it comes to being an all-around best athlete, you're not just talking about the leading scorers of all time, or th...
#1 of 58 Who Is the Best Running Back in the NFL Right Now? 57.9k VOTES Using a combination of speed, strength, and agility, NFL running backs must carry the football through elite defenses. ...
#1 of 58 The Best Fantasy Football Running Backs Of 2019 351 VOTES The top fantasy running backs in 2019 include a combination of new stars taking over the NFL and legends in t...
#12 of 17 Adorable Photos Of NFL Players With Tiny Dogs 105 VOTES The NFL is famous for its big men and their big personalities and big play on the field, but just because everything in the ...
#2 of 45 Who Will Win The 2019 NFL MVP Award? 3.3k VOTES Every 2019 NFL MVP award candidate is looking to leave his mark on the football world. And the top NFL MVP award candidates ...
Olivia Culpo Loves and Hookups 26.4k VIEWS Who is Olivia Culpo dating? Many famous men have dated Olivia Culpo, and this list will give you more details about these lu...