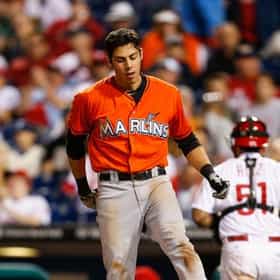 Christian Stephen Yelich (born December 5, 1991) is an American professional baseball outfielder for the Milwaukee Brewers of Major League Baseball (MLB). He previously played for the Miami Marlins. The Marlins selected Yelich in the first round of the 2010 MLB draft. He made his major league debut for the Marlins in 2013, and was traded to the Brewers in the 2017-18 offseason. Yelich won a Gold Glove Award in 2014, the Silver Slugger Award in 2016 and 2018, and the National League's Most Valuable Player Award in 2018. Yelich played for the United States national baseball team in the 2017 World Baseball Classic. Following the conclusion of the tournament, he was named to the All-World ... more on Wikipedia

Christian Yelich is ranked on...