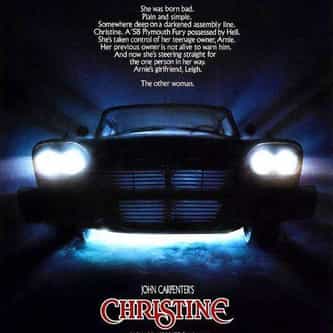 Tagline
Hell hath no Fury...like Christine.
How do you kill something that can't possibly be alive?

Christine is a 1983 American horror thriller film directed by John Carpenter and starring Keith Gordon, John Stockwell, Alexandra Paul and Harry Dean Stanton. It was written by Bill Phillips and based on the homonymous novel by Stephen King, published in 1983. The story, set in 1978, follows a sentient and violent automobile named "Christine", and its effects on Christine's teenaged owner. ... more on Wikipedia

2.8k readers 'Christine’ Is One Of The Most Underrated Adaptations To Come Off Stephen King’s Assembly Line

Christine IS LISTED ON