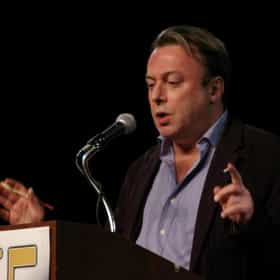 Christopher Eric Hitchens (13 April 1949 – 15 December 2011) was an English-American author, columnist, essayist, orator, journalist, and social critic. Hitchens was the author, co-author, editor, or co-editor of over 30 books, including five collections of essays on culture, politics, and literature. A staple of public discourse, his confrontational style of debate made him both a lauded public intellectual and a controversial public figure. He contributed to New Statesman, The Nation, The Weekly Standard, The Atlantic, London Review of Books, The Times Literary Supplement, Slate, Free Inquiry, and Vanity Fair. Having long described himself as a democratic socialist, Marxist, and an ... more on Wikipedia

Christopher Hitchens is ranked on...

#970 of 1,176 The Best Writers of All Time 312.5k VOTES The pen is truly mightier than the sword, and if you’re a book enthusiast you know that to be true. Some of history’s most i...
#4 of 78 People who voted for Christopher Hitchens... are 18x more likely to vote for George Orwell on this list History's Greatest Essayists 4.7k VOTES Some of the most famous literary works are essays, written by great authors and writers. Essays span a variety of genres, in...
#308 of 1,471 The Greatest Minds of All Time 745.4k VOTES List of the Greatest Minds of All Time, throughout history. This list represents the most influential thinkers across variou...
#97 of 102 The Lamest Authors of All Time 71.4k VOTES There are always going be writers (and books) some folks just don't like. Books, and the skills of the people who write th...
#10 of 134 The Most Controversial Writers of All Time 3.5k VOTES As writing can be a provocative practice that often requires challenging social norms and common convention, it's no surpris...
#90 of 100 Who Is The Most Famous Chris In The World? 1.3k VOTES How many celebrities named Chris can you think of? The famous Chris's below have many different professions, as this li...
Men Who Resent Their Parents For Having Them Circumcised 186.3k VIEWS Celebrities against circumcision are mostly celebrities who wish their parents didn't get them circumcised. Circumcision is ...

Christopher Hitchens is also found on...