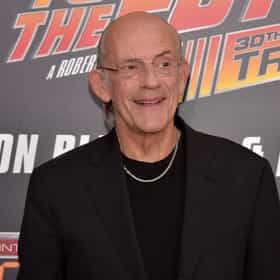 Christopher Allen Lloyd (born October 22, 1938) is an American actor and voice actor. Lloyd came to public attention in Northeastern theater productions during the 1960s and early 1970s, earning Drama Desk and Obie awards for his work. He made his screen debut in One Flew Over the Cuckoo's Nest (1975), and gained widespread recognition as Jim Ignatowski in the comedy series Taxi (1978–1983), for which he won two Emmy Awards. Lloyd also starred as Emmett "Doc" Brown in the Back to the Future trilogy, Judge Doom in Who Framed Roger Rabbit (1988), and Uncle Fester in The Addams Family (1991) and its sequel Addams Family Values (1993). Lloyd earned a third Emmy for his 1992 guest ... more on Wikipedia

Christopher Lloyd is ranked on...

#74 of 362 The Funniest People of All Time 893.2k VOTES The funniest people of all time are a mix of actors, comedians, and even a few people who probably didn't start off trying t...
#93 of 180 The Best Living American Actors 273.4k VOTES It takes a lot to make a movie great. There has to be excellent writing, production, direction, editing, and of course, acti...
#64 of 195 People who voted for Christopher Lloyd... also upvote Indiana Jones Franchise on The Best Movies of All Time also upvote Lord of the Rings Franchise on The Best Movies of All Time The Best American Actors Working Today 161.3k VOTES There have been plenty of great American actors throughout film history, but which are the greatest working today? This list...
#18 of 532 People who voted for Christopher Lloyd... Men are 3x more likely to vote for this People outside of the US are 2x more likely to vote for this Famous Men You'd Want to Have a Beer With 1.8M VOTES If given the opportunity to sit down for a beer with any famous male figure, which famous men would you most want to get a d...
#25 of 78 The Best Film Actors Who Got Famous on TV First 13.7k VOTES This is a list of famous film actors who got famous on TV first, as ranked by experts and fans alike. There are many route...
#74 of 149 The Best Animated Voiceover Performances 143.6k VOTES This list contains information about the best animated voiceover performances in film, ranked by your votes. Several famous ...
#14 of 25 26 Celebrities Who Look Just Like Video Game Characters 16.7k VOTES Art constantly imitates life, and that is definitely the case when it comes to video game characters. These are celebrities ...
#10 of 32 Celebrities Who Have Always Been Old 4k VOTES Have you ever noticed that there are some celebrities that don't age but have always been old? It doesn't matter how young t...
#138 of 159 Celebrity Death Pool 2013 15.4k VOTES Every year we lose more and more famous celebrities. Whether it's from natural causes, suicide, drug abuse or just plain cra...
#30 of 172 Dreamcasting Celebrities We Want To See On The Masked Singer 7.6k VOTES The US version of The Masked Singer has taken social media by storm and no wonder. With secret, costumed celebrities and clu...
#25 of 100 Who Is The Most Famous Chris In The World? 1.3k VOTES How many celebrities named Chris can you think of? The famous Chris's below have many different professions, as this li...
Celebrities Who Have Been Married 4 (or More!) Times 1.1M VIEWS Famous people seem to have a knack for binge marrying. Divorces and weddings come and go with such frequency that it can bec...
Famous People Whose Last Name Is Lloyd 2.7k VIEWS Being a fairly common name, it's no surprise there are a lot of famous people with the last name Lloyd. Do you recognize all...
Male Celebrities Who Are 6’1" 4.9k VIEWS This list contains examples of male celebs who are 6'1" loosely ranked by fame and popularity. Surpassing both the aver...

Christopher Lloyd is also found on...