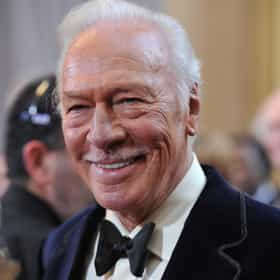 Arthur Christopher Orme Plummer (born December 13, 1929) is a Canadian actor whose career has spanned six decades, beginning with his film debut in Stage Struck (1958). He is known for portraying Captain Georg von Trapp in The Sound of Music (1965), and has portrayed numerous major historical figures, including the Emperor Commodus in The Fall of the Roman Empire (1964), Arthur Wellesley, 1st Duke of Wellington in Waterloo (1970), Rudyard Kipling in The Man Who Would Be King (1975), Mike Wallace in The Insider (1999), Leo Tolstoy in The Last Station (2009), Kaiser Wilhelm II in The Exception (2016), and J. Paul Getty in All the Money in the World (2017). Plummer has received various ... more on Wikipedia

Christopher Plummer is ranked on...

#136 of 2,003 People who voted for Christopher Plummer... People on the West Coast are 2x more likely to vote for this also upvote Lord of the Rings Franchise on The Best Movies of All Time The Greatest Actors & Actresses in Entertainment History 1.7M VOTES The best actors and actresses of all time, male and female, ranked by film fans worldwide. This list of greatest actors and ...
#52 of 90 The Hottest Silver Foxes 72.5k VOTES Silver foxes are among the sexiest older men on the planet. A bit of gray streaked into a full head of hair on a man with we...
#85 of 115 The Greatest Film Actors Of The 2010s 35.1k VOTES Who were the best actors of the 2010s? This list will highlight 2010s actors, from Oscar regulars like Bradley Cooper and Ch...
#30 of 75 People who voted for Christopher Plummer... Women are 2x more likely to vote for this Famous Actors Who Were Almost James Bond 65.2k VOTES Skyfall once again showcased Daniel Craig as one of the most suave and simultaneously vulnerable Bonds in the history of the...
#112 of 122 The Worst Oscar-Winning Actors Ever 238.7k VOTES Bad actors who have won Oscars, in any category, as determined by the votes and selections of Ranker users. This list contai...
#15 of 35 The Hottest Pictures of Older Actors When They Were Young 89.3k VOTES These hot pictures of old celebrities when they were young is here as a reminder that some of today's silver foxes were yest...
#96 of 149 The Best Animated Voiceover Performances 143.6k VOTES This list contains information about the best animated voiceover performances in film, ranked by your votes. Several famous ...
#471 of 1,445 Celebrity Death Pool 2018 477.7k VOTES Welcome to Celebrity Death Pool 2018! In increasingly uncertain times, there remains one constant in life - we all die. Cele...
#583 of 862 Celebrity Death Pool 2016 370.1k VOTES Celebrity death pool 2016: Here's a large list of celebrities we think just might die this year. The only certainties in l...
#18 of 25 Old Celebrities You Didn't Realize Are Still Alive 276k VOTES Here is a list of famous people you didn't realize are still alive. These old actors and actresses were stars decades a...
#28 of 32 Celebrities Who Have Always Been Old 4k VOTES Have you ever noticed that there are some celebrities that don't age but have always been old? It doesn't matter how young t...
#6 of 21 People Who Have EGOT Awards 5.6k VOTES It’s an achievement very few people have managed: snagging the coveted EGOT. Also known as an Emmy, a Grammy, an Oscar, and ...
#10 of 12 The Biggest Oscar Surprises of 2018 501 VOTES The Oscars are never entirely predictable and there were plenty of 2018 Oscar surprises in the mix when nominees were announ...
#137 of 185 Celebrity Death Pool 2014 31.5k VOTES Celebrity death pool 2014: Here's a complete list of celebrities who just might die in 2014. Every year we lose more and mor...
#5 of 5 2018 Golden Globe Nominees for Best Supporting Actor 81 VOTES The 2018 Golden Globes nominations have finally been announced and there is a lot of talent in this year's pool of nominees....
Roles Famous People Are Tired Of Talking About 1.3k VIEWS Typically, when you think of an actor or actress, you picture them in a particular role. It could be the role in which you f...
#38 of 100 Who Is The Most Famous Chris In The World? 1.3k VOTES How many celebrities named Chris can you think of? The famous Chris's below have many different professions, as this li...
Straight Actors Describe Their Experiences Playing Gay Characters 31.5k VIEWS In the early days of film, gay plotlines were largely off-limits. However, as both Hollywood and the public have&n...
#9 of 27 The Best Actors Who Played Scrooge, Ranked 802 VOTES Bah humbug! We're ranking the best Ebenezer Scrooge actors. Scrooge may be one of the most popular Christmas characters of a...
100 Film and TV Celebs Who Have Also Starred on Broadway 15.6k VIEWS Film and TV celebs who have also starred on Broadway are those actors and actresses who have seen success both on screen and...
Straight Actors Who Have Played Gay Characters 120.6k VIEWS List of gay characters played by straight actors, loosely ranked by fame and popularity. One of the great things about being...
39 Famous Actors Who Won Tonys for Plays 3.3k VIEWS List of Famous Actors Who Won Tonys for Plays ranked by fame and popularity. Several famous Hollywood actors have won Tony A...
Actors Who Have Played Hamlet 158.9k VIEWS Hamlet is one of William Shakespeare's most notable tragedies. Many famous actors have portrayed the complicated title chara...

Christopher Plummer is also found on...