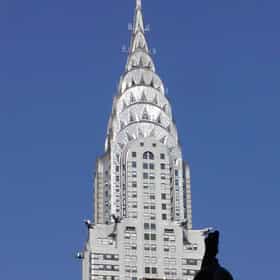 The Chrysler Building is an Art Deco style skyscraper in New York City, located on the east side of Manhattan in the Turtle Bay area at the intersection of 42nd Street and Lexington Avenue. At 1,046 feet, the structure was the world's tallest building for 11 months before it was surpassed by the Empire State Building in 1931. It is still the tallest brick building in the world, albeit with an internal steel skeleton. After the destruction of the World Trade Center, it was again the second-tallest building in New York City until December 2007, when the spire was raised on the 1,200-foot Bank of America Tower, pushing the Chrysler Building into third position. In addition, The New York ... more on Wikipedia

Chrysler Building is ranked on...

Chrysler Building is also found on...

which country is best to study medicine, symbol for hidden, amusement parks in canada, best nhl arenas, rem koolhaas structures, who is lily in 8 mile, volcanoes in usa, The Expanse episodes, famous theater in new york, countries in australia