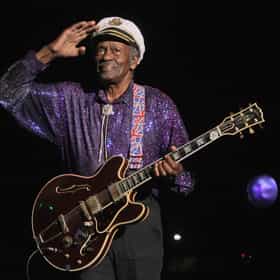 Charles Edward Anderson Berry (October 18, 1926 – March 18, 2017) was an American singer and songwriter, and one of the pioneers of rock and roll music. With songs such as "Maybellene" (1955), "Roll Over Beethoven" (1956), "Rock and Roll Music" (1957) and "Johnny B. Goode" (1958), Berry refined and developed rhythm and blues into the major elements that made rock and roll distinctive. Writing lyrics that focused on teen life and consumerism, and developing a music style that included guitar solos and showmanship, Berry was a major influence on subsequent rock music.Born into a middle-class African-American family in St. Louis, Missouri, Berry had ... more on Wikipedia

The Best Chuck Berry Albums of All Time 173 votes Chuck Berry is one of the greatest musical artists and one of the best rock musicians of all time. Here, you'll find a list ...

Chuck Berry is ranked on...

Chuck Berry is also found on...