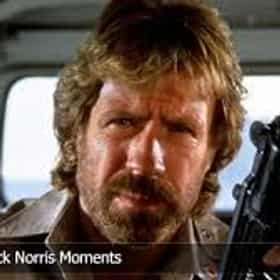 Carlos Ray Norris (born March 10, 1940) is an American martial artist, actor, film producer and screenwriter. After serving in the United States Air Force, he won many martial arts championships and later founded his own school of fighting named Chun Kuk Do. Norris is a black belt in Tang Soo Do, Brazilian jiu jitsu and Judo.Norris appeared in Way of the Dragon alongside Bruce Lee, Good Guys Wear Black, The Octagon, Lone Wolf McQuade, Code of Silence, The Delta Force, and Missing in Action 1, 2, & 3. He was The Cannon Group's leading star in the 1980s. He played the title role in the television series Walker, Texas Ranger from 1993 until 2001. Since 1997, he and model Christie ... more on Wikipedia

Chuck Norris is ranked on...

Chuck Norris is also found on...