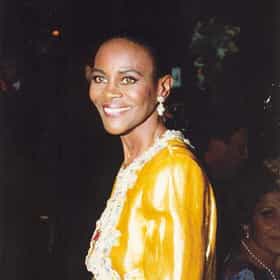 Cicely L. Tyson (born December 19, 1924) is an American actress and former fashion model. In a career spanning more than six decades, she became known for her portrayal of strong African-American women. Tyson is the recipient of three Primetime Emmy Awards, four Black Reel Awards, one Screen Actor Guild Award, one Tony Award and an honorary Academy Award. Having appeared in minor film and television roles early in her career, Tyson garnered widespread attention and critical acclaim for her performance as Rebecca Morgan in Sounder (1972); she was nominated for both the Academy Award and Golden Globe Award for Best Actress for her work in the film. Tyson's portrayal of the title role in ... more on Wikipedia

Cicely Tyson is ranked on...

#161 of 940 The Best Actresses in Film History 1.1M VOTES The best actresses ever are ranked here in this list of the best actresses in film history. These are the greatest actresses...
#926 of 2,003 The Greatest Actors & Actresses in Entertainment History 1.7M VOTES The best actors and actresses of all time, male and female, ranked by film fans worldwide. This list of greatest actors and ...
#157 of 232 The Greatest American Actresses Of All Time 186.8k VOTES It takes a lot to make a movie great. There has to be excellent writing, production, direction, editing, and of course, acti...
#7 of 226 The Greatest Black Actresses of All Time 77.6k VOTES This list ranks the very best black and African Americans actresses of all time. Throughout the history of Hollywood, movies...
#38 of 60 The Greatest Non-White Actresses 9.8k VOTES In 1939, Hattie McDaniel became the first African-American to win an Academy Award. She was recognized for her work in Gone ...
Every Person Who Has Hosted 'Saturday Night Live' 52.1k VIEWS Live from New York! It's Saturday Night! This is a list of all Saturday Night Live hosts, in reverse order,...
The Locations of All Hollywood Walk of Fame Stars 419.8k VIEWS A list of stars on the Hollywood Walk of Fame, with photos. This list includes all television and movie stars. Acquiring a s...
How 30 A-Listers Changed Over Time 43.1k VIEWS A-list celebrities usually qualify as recognizable because of how long they've been entertaining their fans. People like Bet...
And The (Honorary) Academy Award Goes To ... 330 VIEWS All honorary Oscar recipients have achieved the ultimate recognition in Hollywood. From the first ceremony in 1929, the Acad...

Cicely Tyson is also found on...