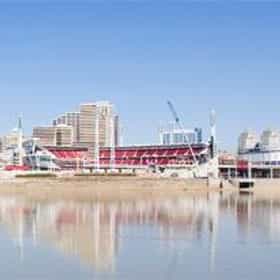 Cincinnati is a city in and the county seat of Hamilton County, Ohio, United States. The third-largest city in Ohio and the 65th-largest city in the United States, it had a population of 296,945 at the 2010 census. According to the census, the population of the metropolitan area was 2,214,954 - the 28th-largest Metropolitan Statistical Area in the United States and the largest centered in Ohio. Settled in 1788, the city is located on the north side of the confluence of the Licking with the Ohio River. The latter forms the border between the states of Ohio and Kentucky. In the early 19th century, Cincinnati was an American boomtown in the heart of the country; it rivaled the larger ... more on Wikipedia

The Best Restaurants for Cincinnati Chili 1k votes You might think you know all about chili, but Cincinnati chili is a whole different animal. Only real Cincinnati locals know...
The Best Burgers in Cincinnati 400 votes The hamburger is an American institution and the Cincinnati, Ohio area is known for some truly delectable burger creations. ...
The Most Heartbreaking Cincinnati Bengals Moments 1.1k votes Over the course of 46 seasons in the NFL, the Cincinnati Bengals seem to have had more than their fair share of heartbreakin...

Cincinnati is ranked on...

Cincinnati is also found on...