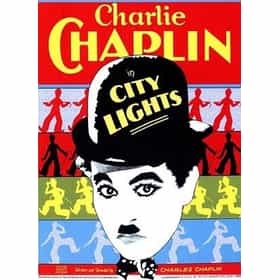 City Lights is a 1931 American romantic comedy film written by, directed by, and starring Charlie Chaplin. The story follows the misadventures of Chaplin's Tramp as he falls in love with a blind girl and develops a turbulent friendship with a millionaire. Although sound films were on the rise when Chaplin started developing the script in 1928, he decided to continue working with silent productions. Filming started in December 1928, and ended in September 1930. City Lights marked the first time Chaplin composed the film score to one of his productions and it was written in six weeks with Arthur Johnston. ... more on Wikipedia

City Lights is ranked on...

#47 of 241 The Most Inspirational Movies Ever 47.7k VOTES This inspirational movies list, with videos, includes some of the most uplifting films of all time. Inspiring films do not c...
#44 of 75 The Greatest Classic Romance Movies 6.5k VOTES Who wouldn't swoon over a romantic tale of two people coming together against all odds to fall in love? These classic r...
#23 of 102 The Best Movies Directed by the Star 33.7k VOTES The best movies directed by the star include some of the greatest films ever made. Many of the films listed here are conside...
#19 of 21 The Funniest Classic Wacky Comedies, Ranked 1.9k VOTES Slapstick comedy can create the type of belly laughter that is all but impossible to hold back. The best wacky comedy film...
#144 of 380 The Greatest Romantic Comedies of All Time 195.7k VOTES Romantic comedy is one of the oldest and most popular film genres of all time. The term "romantic comedy" can refe...
#71 of 80 The Best '30s Romance Movies 984 VOTES This list tanks 1930s romance movies from best to worst, with those that have aged like fine wine at the top and those that ...
#46 of 195 The Best G-Rated Comedies 6.5k VOTES List of G-Rated kids' comedies, ranked from best to worst with movie trailers when available. These comedies are all G-Rated...
#15 of 34 The Best Movies About Blindness 560 VOTES Some of the most inspirational movies out there take a detailed look at the tragic events that happen in a person’s life a...
#54 of 60 The Best Movies About Unrequited Love 10.6k VOTES There’s nothing better than an inspirational romance movie, and there’s nothing more heartbreaking than a dramatic film abou...
#2 of 76 The Best Movies Directed by Charlie Chaplin 805 VOTES List of all movies directed by Charlie Chaplin ranked from best to worst with photos. Films directed by Charlie Chaplin are ...
#3 of 203 The Best Movies of 1931 2.7k VOTES List of the best movies of 1931, with movie trailers when available. These top movies of 1931 are listed by popularity, so t...

City Lights is also found on...