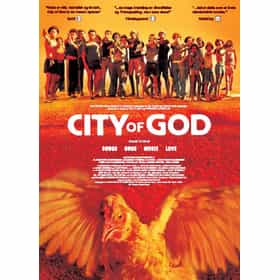 City of God is a 2002 Brazilian crime drama film directed by Fernando Meirelles and co-directed by Kátia Lund, released in its home country in 2002 and worldwide in 2003. The story was adapted by Bráulio Mantovani from the 1997 novel of the same name written by Paulo Lins, but the plot is loosely based on real events. It depicts the growth of organized crime in the Cidade de Deus suburb of Rio de Janeiro, between the end of the 1960s and the beginning of the 1980s, with the closure of the film depicting the events between the Li'l Zé and Knockout Ned. ... more on Wikipedia

lists about City of God

City of God Movie Quotes 103 votes Here are the best City of God quotes, with movie clips, ranked by fans. This list of great movie quotes from City of God col...

City of God is ranked on...

City of God is also found on...