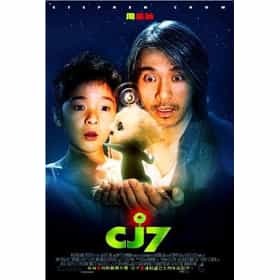 CJ7 is a 2008 Hong Kong-Chinese science fiction film co-written, co-produced, starring, and directed by Stephen Chow. It was released on 31 January 2008 in Hong Kong. It was also released on 14 March 2008 in the United States. In August 2007 the film was given the title CJ7, a play on China's successful Shenzhou manned space missions—Shenzhou 5 and Shenzhou 6. It was previously known by a series of working titles—Alien, Yangtze River VII, Long River 7 and most notably, A Hope. CJ7 was filmed in Ningbo, in the Zhejiang province of China. ... more on Wikipedia