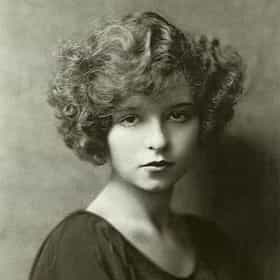 Clara Gordon Bow (; July 29, 1905 – September 27, 1965) was an American actress who rose to stardom in silent film during the 1920s and successfully made the transition to "talkies" after 1927. Her appearance as a plucky shopgirl in the film It brought her global fame and the nickname "The It Girl". Bow came to personify the Roaring Twenties and is described as its leading sex symbol.Bow appeared in 46 silent films and 11 talkies, including hits such as Mantrap (1926), It (1927), and Wings (1927). She was named first box-office draw in 1928 and 1929 and second box-office draw in 1927 and 1930. Her presence in a motion picture was said to have ensured investors, by ... more on Wikipedia

Clara Bow is ranked on...

#346 of 3,310 People who voted for Clara Bow... People over 50 are 4x more likely to vote for this The Most Beautiful Women of All Time 132.1M VOTES Here are the most beautiful women of all time ranked not on looks alone, regardless of their talent. Thi...
#418 of 942 The Best Actresses in Film History 1.1M VOTES The best actresses ever are ranked here in this list of the best actresses in film history. These are the greatest actresses...
#67 of 232 The Greatest American Actresses Of All Time 185.3k VOTES It takes a lot to make a movie great. There has to be excellent writing, production, direction, editing, and of course, acti...
The Locations of All Hollywood Walk of Fame Stars 419.2k VIEWS A list of stars on the Hollywood Walk of Fame, with photos. This list includes all television and movie stars. Acquiring a s...
Famous People Named Clara 8.1k VIEWS Ever wondered how many famous people named Clara there are? This list of celebrities named Clara includes photos and infor...
What Did America's Sweetheart Look Like In Every Decade? 8.4k VIEWS There's always one. An actress comes along that captures the attention of a nation and becomes anointed America's Sweet...

Clara Bow is also found on...