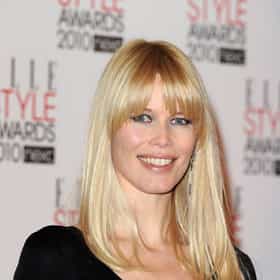 Claudia Maria Schiffer (German pronunciation: [ˈklaʊ̯dɪa ˈʃɪfɐ]; born 25 August 1970) is a German supermodel, actress, fashion designer, and executive producer, based in the United Kingdom. She rose to fame in the early 1990s as one of the world's most successful models, cementing her supermodel status. In her early career, she was compared to Brigitte Bardot.She has appeared on more than one thousand magazine covers and holds the record for the model with the most magazine covers, listed in the Guinness Book of World Records. In 2002, Forbes estimated her net worth to be around US$55 million. ... more on Wikipedia

Claudia Schiffer is ranked on...

Claudia Schiffer is also found on...