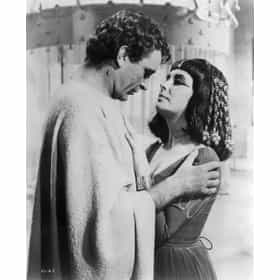 Cleopatra is a 1963 epic historical drama film chronicling the struggles of Cleopatra VII, the young Queen of Egypt, to resist the imperial ambitions of Rome. It was directed by Joseph L. Mankiewicz and shot in the 70 mm Todd-AO format, with a screenplay adapted by Mankiewicz, Ranald MacDougall and Sidney Buchman from a book by Carlo Maria Franzero. The film stars Elizabeth Taylor, Richard Burton, Rex Harrison, Roddy McDowall, and Martin Landau. Cleopatra achieved notoriety during its production for its massive cost overruns and production troubles, which included changes in director and cast, a change of filming locale, sets that had to be constructed twice, lack of a firm shooting ... more on Wikipedia

Cleopatra is ranked on...

Cleopatra is also found on...