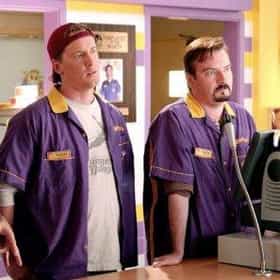 Clerks II is a 2006 American comedy film written and directed by Kevin Smith, sequel to his 1994 film Clerks, and his sixth feature film to be set in the View Askewniverse. The film stars Brian O'Halloran, Jeff Anderson, Rosario Dawson, Trevor Fehrman, Jennifer Schwalbach Smith, Jason Mewes and Kevin Smith, and picks up with the original characters from Clerks: Dante Hicks, Randal Graves and Jay and Silent Bob 10 years after the events of the first film. Unlike the first film, which was shot in black-and-white, this film was shot in color. The film was released on July 21, 2006. It screened out of competition at the 2006 Cannes Film Festival and won the Audience Award at the 2006 ... more on Wikipedia

Clerks II is ranked on...

Clerks II is also found on...