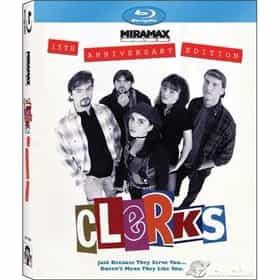 Clerks is a 1994 American black-and-white comedy film written and directed by Kevin Smith, who also appears in the film as Silent Bob. Starring Brian O'Halloran as Dante Hicks and Jeff Anderson as Randal Graves, it presents a day in the lives of two store clerks and their acquaintances. Shot entirely in black and white, Clerks is the first of Smith's View Askewniverse films, and introduces several recurring characters, notably Jay and Silent Bob. The structure of the movie contains nine scene breaks, signifying the nine rings of hell as in Dante Alighieri's Divine Comedy, from which the main character, Dante, clearly derives his name. Clerks was shot for $27,575 in the convenience and ... more on Wikipedia

Behind-The-Scenes Stories From The Making Of ‘Clerks’ 2.4k views When it was released in 1994, Clerks was a revolutionary depiction of Generation X, stoner culture, retail, and society as a...

Clerks is ranked on...

Clerks is also found on...