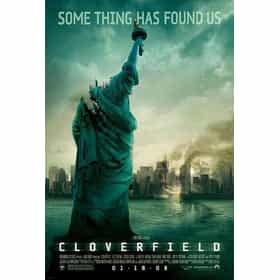 Cloverfield is a 2008 American science fiction found footage monster film directed by Matt Reeves, produced by J. J. Abrams & Bryan Burk, and written by Drew Goddard. Before settling on an official title, the film was marketed as 1-18-08. The film follows six young New Yorkers attending a going-away party on the night that a gigantic monster attacks the city. First publicized in a teaser trailer in screenings of Transformers, the film was released on January 17 in New Zealand, Russia and Australia; January 18 in North America; January 24 in South Korea; January 25 in Taiwan; January 31 in Germany; and February 1 in the United Kingdom, Ireland and Italy. In Japan, the film was ... more on Wikipedia

Cloverfield is ranked on...

Cloverfield is also found on...