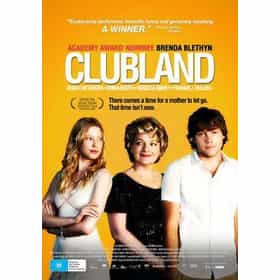 Clubland, internationally known as Introducing the Dwights, is a 2007 Australian comedy film, directed by Cherie Nowlan, written by Keith Thompson, and starring Oscar nominee Brenda Blethyn and Emma Booth. The film was nominated for eleven AFI awards, winning the award for best supporting actress for Emma Booth. It sold to Warner Independent Pictures for $4.1 million, after debuting at Sundance Film Festival, where it gained standing ovations. The film opened in the U.S. on 4 July holiday weekend, the first Australian film ever to do so. ... more on Wikipedia

Clubland is ranked on...

Clubland is also found on...