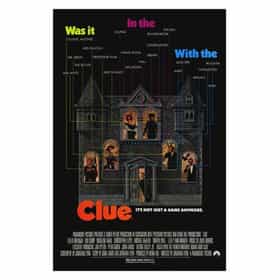 Clue is a 1985 American ensemble mystery comedy film based on the board game of the same name. The film was directed by Jonathan Lynn, who collaborated on the script with John Landis, and stars Eileen Brennan, Tim Curry, Madeline Kahn, Christopher Lloyd, Michael McKean, Martin Mull, and Lesley Ann Warren. The film was produced by Debra Hill. In keeping with the nature of the board game, the theatrical release included three possible endings, with different theaters receiving one of the three endings. In the film's home video release, all three endings were included. The film initially received mixed reviews and did poorly at the box office, ultimately grossing $14.6 million in the ... more on Wikipedia

Clue is ranked on...

Clue is also found on...