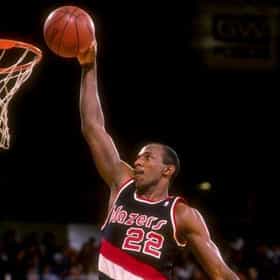 Clyde Austin Drexler (born June 22, 1962) is an American former professional basketball player who is the commissioner of the Big3 3-on-3 basketball league. Nicknamed "Clyde the Glide", he played 15 seasons in the National Basketball Association (NBA), spending a majority of his career with the Portland Trail Blazers before finishing with the Houston Rockets. He was a ten-time NBA All-Star and named one of the 50 Greatest Players in NBA History. Drexler won an NBA championship with Houston in 1995, and earned a gold medal on the 1992 United States Olympic team known as "The Dream Team". He was inducted twice into the Naismith Memorial Basketball Hall of Fame, in ... more on Wikipedia

Clyde Drexler is ranked on...

Clyde Drexler is also found on...