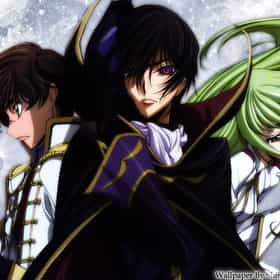 Code Geass: Lelouch of the Rebellion, often referred to as simply Code Geass, is a Japanese anime series created by Sunrise, directed by Gorō Taniguchi, and written by Ichirō Ōkouchi, with original character designs by manga authors Clamp. Set in an alternate timeline, the series focuses on how the former prince Lelouch vi Britannia obtains a power known as Geass and decides to use it to obliterate the Holy Britannian Empire, an imperial monarchy and a superpower that has been conquering various countries. Code Geass first ran in Japan on MBS from October 5, 2006, to July 28, 2007. Its sequel series, Code Geass: Lelouch of the Rebellion R2, ran as a simulcast on JNN stations from April ... more on Wikipedia

The Best Anime Like Code Geass 678 votes Code Geass is one of the most binge-worthy anime series out there. It has the perfect combination of both political strife, ...

Code Geass is ranked on...