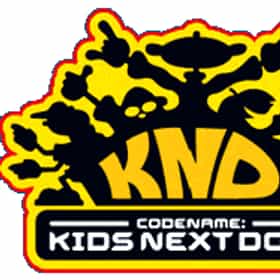 Codename: Kids Next Door, also known as Kids Next Door or by its initials KND, is an American animated television series created by Tom Warburton for Cartoon Network, and the thirteenth of the network's Cartoon Cartoons. The series debuted on Cartoon Network on December 6, 2002, and aired its final episode on January 21, 2008. The series came about as the result of a viewer's poll by Cartoon Network. The series centers on the adventures of five children who operate from a high-tech tree house fighting against adult tyranny. They use advanced 2x4 technology to battle evil adult super villains. Using their codenames they are Sector V, part of a global organisation called The Kids Next ... more on Wikipedia

Codename: Kids Next Door is ranked on...

#136 of 238 The Best Cartoons to Watch Stoned 64.9k VOTES Do you often wonder, “what are the best shows to watch high?” Or, more specifically, “what are the best cartoons to watch hi...
#2 of 18 The Best Cartoon Network Shows of the 2000s 2.2k VOTES Cartoon Network played an important part in many people's childhoods. It is home to some of the best cartoons of all time, a...
#6 of 13 The Greatest Cartoon Cartoons Ever 8.2k VOTES As this list makes clear, "Cartoon Cartoons" are among the best animated series ever. It all started in 1995 with ...
#5 of 134 The Best Cartoon Network TV Shows 496.6k VOTES Cartoon Network shows have been bringing some of the funniest and most action-packed cartoons that both kids and adults can ...
#57 of 375 The Best Children's TV Shows 49.6k VOTES Here you have it, folks: a list of the very best kids' shows on television, ranked from best to worst, as voted on by people...
#50 of 99 The Best Espionage TV Shows 11.5k VOTES Lies! Deception! Betrayal! Romance! Spies! These are the very best espionage shows on television, ranked from best to worst....

Codename: Kids Next Door is also found on...