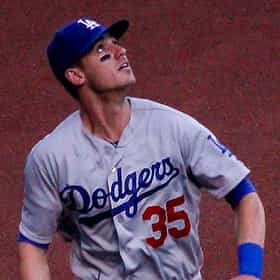 Cody James Bellinger (born July 13, 1995) is an American professional baseball first baseman and outfielder for the Los Angeles Dodgers of Major League Baseball (MLB). He was named an All-Star and the National League's Rookie of the Year in 2017, and won the National League Most Valuable Player Award in 2019. Bellinger is the son of Clay Bellinger, who also played in MLB. Bellinger was drafted by the Los Angeles Dodgers in the fourth round of the 2013 Major League Baseball draft and signed with them on June 13, 2013, for a $700,000 signing bonus, despite a verbal commitment to play college baseball at the University of Oregon. He made his professional debut with the Arizona League ... more on Wikipedia

Cody Bellinger is ranked on...

#258 of 710 The Best Hitters in Baseball History 270.1k VOTES The best hitters in baseball history are those who hold the all-time hitting records in Major League Baseball, change the ga...
#49 of 56 Athletes Who Won MVP Before Turning 25 700 VOTES Sports may be the domain of the young, but even the best athletes still need time to mature once they turn pro. However, the...
#7 of 50 The Most Likable Active MLB Players 1k VOTES Batter up! This is the list of the most likable MLB players currently in the league. Major League Baseball has 162 game...
#4 of 50 The 50 Most Valuable MLB Players For Fantasy Baseball In 2019 4.1k VOTES Opening Day 2019 is around the corner, and while MLB managers focus on setting their roster and choosing an opening day...
#4 of 50 Who Will Win The 2020 National League MVP Award? 786 VOTES While everyone in baseball wants to win a World Series, the best players in the league will all be competing for the 20...
#6 of 48 Every Athlete On The Scott Boras Client List, Ranked 610 VOTES Scott Boras is one of the top sports agents in the world, and all Boras Corporation clients have already proved something by...
#40 of 175 The Best Los Angeles Dodgers of All Time 32.6k VOTES This is a list of the greatest Los Angeles Dodgers ever. Since they moved from Brooklyn to Los Angeles in 1958, the Dodgers ...
#3 of 125 The Best Current MLB Hitters 20.9k VOTES Whether you're working on your fantasy baseball roster or simply staying updated with the 2018 MLB rankings, ...
17 Angry MLB Players React To The Astros Cheating Scandal 343 VIEWS The hot topic at spring training for the 2020 MLB season was obviously the Houston Astros sign-stealing scandal, and in thei...