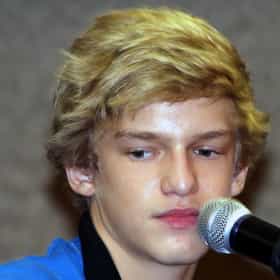 Cody Robert Simpson (born 11 January 1997) is an Australian musician, singer, songwriter, dancer and actor. He formed a band called the Tide, and issued their debut song, "Waiting For the Tide", releasing it on his own label, The Coast House Records. In 2017, he signed with the talent agency ICM Partners. During his beginning in 2010, Simpson had a record deal with Atlantic Records after his covers on YouTube went viral. He released two albums on the label, Paradise (2012) and Surfers Paradise (2013). He also released two EPs, 4 U (2010) and Coast to Coast (2011). His deal with Atlantic Records ended in 2014 due to creative differences. In 2018, he booked the lead role of ... more on Wikipedia

Everyone Cody Simpson Has Dated, From Miley Cyrus to Kylie Jenner 4.4k views He’s an Australian surfer turned singer, so it’s no surprise there are a lot of Cody Simpson exes. So if you’ve ever wondere...

Cody Simpson is ranked on...

#62 of 1,075 The Worst Bands & Musicians of All Time 1.3M VOTES The worst bands in music history, ranked by music fans (and haters.) This list contains the most awful bands to listen to fr...
#174 of 530 Annoying Celebrities Who Should Just Go Away Already 1.2M VOTES The most annoying celebrities, ranked by entertainment fans themselves. These annoying celebs are obnoxious, overexposed, ...
#84 of 113 People We Loved to Hate in 2013 40.4k VOTES These are the People we loved to hate in 2013. This list includes a slew of shocking, disheartening and downright dirty happ...
28 Celebrities You Can Follow on Snapchat 60k VIEWS Snapchat isn't just for sending dirty photos to that special someone, or for creating hilarious picture-inspired jokes. Sinc...
Miley Cyrus's Loves & Hookups 77.5k VIEWS Who is Miley Cyrus dating? Celebrity loves and lovers. Who Miley Cyrus dated; list of Miley Cyrus loves, breakups, boyfriend...
Famous People Named Cody 12.7k VIEWS If your name is Cody, then you're in some great company. Here's our list of the most famous people named Cody, including pho...
Stella Hudgens Loves and Hookups 1.1k VIEWS Who is Stella Hudgens dating? Many famous men have dated Stella Hudgens, Vanessa Hudgen's younger sister, and this list will...
Pop Stars' Very First Tweets 10.3k VIEWS List of pop stars's first Tweets. Behold this collection of celebrity Tweets from some of the most popular musicians in the ...

Cody Simpson is also found on...