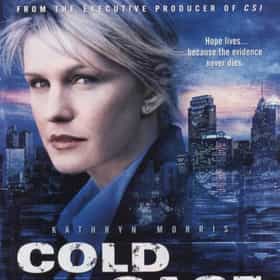 Cold Case is an American police procedural television series which ran on CBS from September 28, 2003 to May 2, 2010. The series revolved around a fictionalized Philadelphia Police Department division that specializes in investigating cold cases. On May 18, 2010, CBS announced that the series had been canceled. The series currently airs in syndication, and also on Ion Television on Wednesdays, Thursdays, and Fridays in the U.S. and on Viva in Canada. Sleuth channel occasionally airs it at midnight on the weekdays. In 2011, the show began airing on MyNetworkTV. ... more on Wikipedia

Cold Case is ranked on...

Cold Case is also found on...