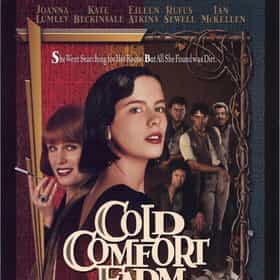 Cold Comfort Farm is a 1995 British comedy film directed by John Schlesinger and produced by the BBC and Thames Television, an adaptation of Stella Gibbons' 1932 book of the same name, the film stars Kate Beckinsale, Joanna Lumley, Ian McKellen and Rufus Sewell. Originally broadcast on 1 January 1995 on the BBC, it was Schlesinger's final film shot in his home country of Britain, and was picked up for theatrical release in North America through Gramercy Pictures, where it was a small success. ... more on Wikipedia

Cold Comfort Farm is ranked on...