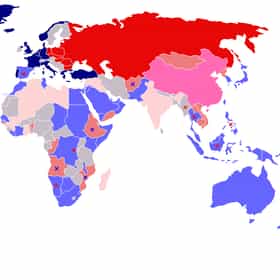 The Cold War was a state of political and military tension after World War II between powers in the Western Bloc and powers in the Eastern Bloc. Historians have not fully agreed on the dates, but 1947–1991 is common. It was termed as "cold" because there was no large-scale fighting directly between the two sides, although there were major regional wars in Korea, Vietnam and Afghanistan that the two sides supported. The Cold War split the temporary wartime alliance against Nazi Germany, leaving the USSR and the US as two superpowers with profound economic and political differences: the former being a single-party Marxist–Leninist state, and the latter being a capitalist state ... more on Wikipedia

Cold War is ranked on...

The Longest Wars In History 43.6k VIEWS Some conflicts are passed down from generation to generation, either because of their size, or because they simmer at a low ...