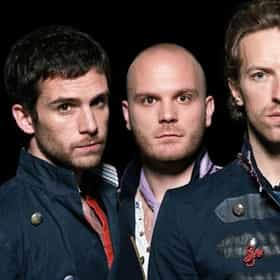 Coldplay are a British rock band formed in London in 1996. The four members – which include lead vocalist/pianist Chris Martin, lead guitarist Jonny Buckland, bassist Guy Berryman and drummer Will Champion – were at University College London and came together from 1996 to 1998, during which time the band changed names from Pectoralz, to Starfish, then Coldplay. Creative director and former manager Phil Harvey is often referred to as the fifth member by the band. They recorded and released two EPs: Safety in 1998 and The Blue Room in 1999. The latter was their first release on a major label, after signing to Parlophone.Coldplay achieved worldwide fame with the release of the song ... more on Wikipedia

The Best Coldplay Songs of All Time 25k votes All the best Coldplay songs of all time, compiled into one list of Coldplay songs for fans to rank from best to worst. The b...
Reasons Why Americans Hate Coldplay, Britain's Biggest Band 6.2k votes Asking Americans to agree on something is like asking the weather to stay consistent: It’s not going to happen. Unless of co...
The Best Coldplay Albums of All-Time 1.7k votes Coldplay are one of the biggest alternative rock bands, biggest pop bands and biggest bands of the 2000s. Since they’re such...
The Best Coldplay Music Videos 265 votes Coldplay official music videos as found on MTV, VH1 and YouTube. Coldplay is an English alt-rock band comprised of Chris Mar...

Coldplay is ranked on...

Coldplay is also found on...