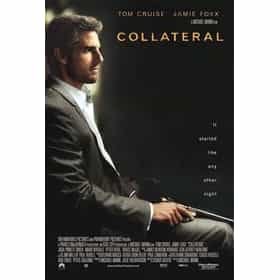 Collateral is a 2004 American neo-noir film directed by Michael Mann from a screenplay written by Stuart Beattie, and starring Tom Cruise as a contract killer and Jamie Foxx as a taxi driver who finds himself his hostage. The film is set in Los Angeles, California in January 2004, and the supporting cast includes Jada Pinkett Smith and Mark Ruffalo. Foxx and Cruise's performances were widely praised, with Foxx being nominated for the Academy Award for Best Supporting Actor. ... more on Wikipedia

Collateral is ranked on...

Collateral is also found on...