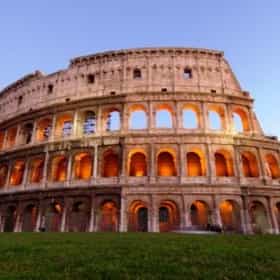 The Colosseum or Coliseum, also known as the Flavian Amphitheatre is an elliptical amphitheatre in the centre of the city of Rome, Italy. Built of concrete and stone, it is the largest amphitheatre in the world, and is considered one of the greatest works of architecture and engineering., The Colosseum is situated just east of the Roman Forum. Construction began under the emperor Vespasian in 72 AD, and was completed in 80 AD under his successor and heir Titus. Further modifications were made during the reign of Domitian. These three emperors are known as the Flavian dynasty, and the amphitheatre was named in Latin for its association with their family name. The Colosseum could hold, ... more on Wikipedia

How Did The Romans Build The Colosseum? 5.7k views One of the world's most notable feats of architecture is the Colosseum in Rome. Opened in 80 CE by Emperor Titus, this massi...

Colosseum is ranked on...

#7 of 16 16 Underrated Historical Monuments That Should Be Wonders of the Ancient World 6.2k VOTES There are only seven official Wonders of the Ancient World, but considering all of the amazing things you can find on p...
#1 of 31 31 Amazing LEGO Versions of Famous Monuments 13.3k VOTES LEGO versions of famous monuments recreate some of the most beautiful buildings in the world along with some of the top natu...
#1 of 45 The Top Must-See Attractions in Rome 2k VOTES List of the best things to do in Rome, ranked by travelers. Rome is one of the most popular vacation destinations in ...
#7 of 57 The Top Must-See Attractions in Italy 1.3k VOTES List of things to do in Italy. What are the best attractions in Italy? Italy is known for its Roman history and famous for i...

Colosseum is also found on...