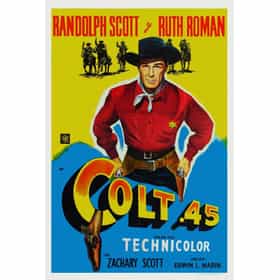 Colt .45 is a 1950 American Western film directed by Edwin L. Marin and starring Randolph Scott, Ruth Roman, and Zachary Scott. Reissued under the title Thundercloud, the film served as the loose basis for the television series Colt .45 seven years later. Written by Thomas W. Blackburn, author of the lyrics to The Ballad of Davy Crockett, the film is about a gun salesman and gunfighter who tracks down a killer who stole two new Colt .45 repeating pistols leaving a trail of dead bodies behind him. The revolvers used in the movie were actually first model .44 Caliber Colt revolving belt pistols made in 1849 and reaching final form by 1850. Scott correctly demonstrated how to load them so ... more on Wikipedia