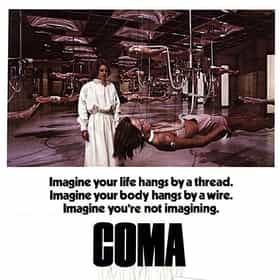 This film is a 1978 suspense film based on the 1977 novel of the same name by Robin Cook. The film rights were acquired by director Michael Crichton, and the movie was produced by Martin Erlichmann for Metro-Goldwyn-Mayer. The cast includes Geneviève Bujold, Michael Douglas, Elizabeth Ashley, Richard Widmark, and Rip Torn. Among the actors in smaller roles are Tom Selleck, Lois Chiles, and Ed Harris. The film is in color with stereo sound and runs for 113 minutes. ... more on Wikipedia

Coma is ranked on...

Coma is also found on...