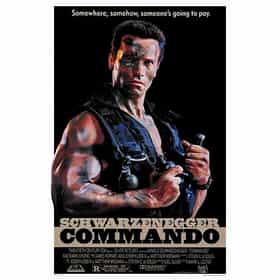 Commando is a 1985 American action film directed by Mark L. Lester, and starring Arnold Schwarzenegger and Rae Dawn Chong. The film was released in the United States on October 4, 1985. The film was shot in Los Angeles, California. The film was nominated for a Saturn Award for Best Special Effects but lost to James Cameron's Aliens. The film's score was provided by James Horner. A critical success and commercial hit, Commando was the 7th highest grossing R rated movie of 1985 worldwide, and the 25th highest grossing overall. ... more on Wikipedia

Behind-The-Scenes Stories From The Making Of 'Commando' 9.2k views Though Arnold Schwarzenegger's acting legacy will forever be cemented by his title-character role in 1984's The Terminator, ...

Commando is ranked on...

Commando is also found on...