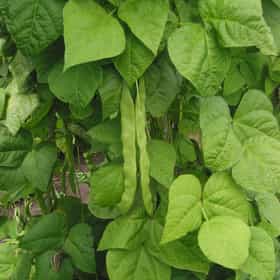 Phaseolus vulgaris, the common bean, also known as string bean, field bean, flageolet bean, French bean, garden bean, haricot bean, pop bean, or snap bean, is a herbaceous annual plant grown worldwide for its edible fruit, either the dry seed or the unripe fruit, both of which are referred to as beans. The leaf is also occasionally used as a vegetable, and the straw can be used for fodder. Along with other species of the bean genus, it is classified botanically into the legume family, most of whose members acquire nitrogen through an association with rhizobia, a species of nitrogen-fixing bacteria. The common bean is a highly variable species with a long history of cultivation. All of ... more on Wikipedia

Common Bean is ranked on...

#10 of 29 The Tastiest Beans & Legumes 2.4k VOTES A list of beans and other legumes. These are edible plants in which the leaves, stems, flowers, or roots are edible. This li...

what to add into ramen where does the royal family live what superpowers does spiderman have wharton reunion 2020 dolph lundgren movies list worst vegetable to eat coca cola flavors 4.5 as a percent who sings season of the witch what to eat with dip