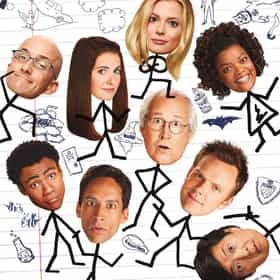 Community is an American television sitcom created by Dan Harmon that premiered on NBC on September 17, 2009. The single-camera series follows an ensemble cast of students at a community college in the fictional town of Greendale, Colorado. It makes heavy use of meta-humor and pop culture references, often parodying film and television clichés and tropes. Community has received acclaim from critics, being ranked in several critics' lists of the best television series in 2010, 2011, and 2012, and has gained a cult following. Following cancellation by NBC in May 2014 after five seasons, Community was renewed for a sixth, 13-episode season by Yahoo! Screen, which premiered on March ... more on Wikipedia

It's Always Sunny in Philadelphia
Fan Theories About 'Community' 1.8k votes Community has some of the most active and dedicated supporters on the internet, so it's no surprise there's a rich world of ...
The Best Community Characters of All Time 4.3k votes List of the best Community characters, with pictures and character bios when available. With such a great cast of characters...
The Best Community Episodes 4.6k votes List of the best Community episodes, as determined by voters like you. Over six seasons the world's best study group at Gree...
The Best Holiday Episodes On Community 152 votes Join the study group at Greendale, and enjoy the best Community holiday episodes. Whether you're looking for Christmas episo...
The Best Troy and Abed Moments on Community 466 votes The unlikely pairing of a former high school star jock and a pop culture nerd wasn’t something that should have worked as we...
Community Jokes You May Have Missed the First Time 140 votes Community was a fast-paced show, jam-packed with humor that you often had to be sharp to catch. From the perfectly executed ...
The Best Seasons of 'Community' 44 votes All the seasons of Community were great, but which seasons really stand out? After introducing viewers to the students and t...

Community is ranked on...