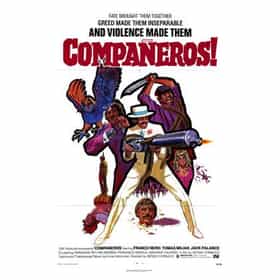 Compañeros is a Zapata Western directed by Sergio Corbucci in 1970. The film, an Italian-Spanish co-production, stars Franco Nero, Tomas Milian, Jack Palance and Fernando Rey. The soundtrack for the film was written by Ennio Morricone, and the orchestra was conducted by Bruno Nicolai. Compañeros is one of Corbucci's best-known westerns, as well as one of the best-known spaghetti westerns altogether. The film has been compared to Il buono, il brutto, il cattivo, as it intertwines the paths of several characters in the middle of a conflict, but takes place during the Mexican Revolution instead of the American Civil War. Due to the setting and Nero's and Milián's ... more on Wikipedia

Compañeros is ranked on...

Compañeros is also found on...