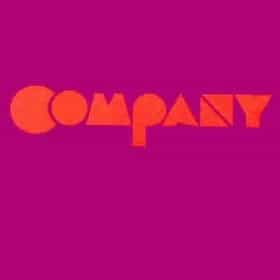 Company is a 1970 musical comedy with music and lyrics by Stephen Sondheim and book by George Furth. The original production was nominated for a record-setting fourteen Tony Awards and won six. Originally titled Threes, its plot revolves around Robert (a single man unable to commit fully to a steady relationship, let alone marriage), the five married couples who are his best friends, and his three girlfriends. Unlike most book musicals, which follow a clearly delineated plot, Company is a concept musical composed of short vignettes, presented in no particular chronological order, linked by a celebration for Robert's 35th birthday. Company was among the first musicals to deal with adult ... more on Wikipedia

Company is ranked on...

#17 of 48 Stage Musicals That Would Make Great Movies 5.9k VOTES List of Broadway shows and stage musicals that should be adapted into movies. With the release of new film versions of popul...
#5 of 9 The Musicals You're Most Excited To See In 2020 78 VOTES The best new musicals coming to Broadway in 2020 are a mix between new stage shows and revivals of classic productions. Some...
#4 of 20 The Best Musicals by Stephen Sondheim 1k VOTES Often inspired by fairy tales, folklore, and classic literature, Stephen Sondheim musicals are beloved in the theater world....

Company is also found on...