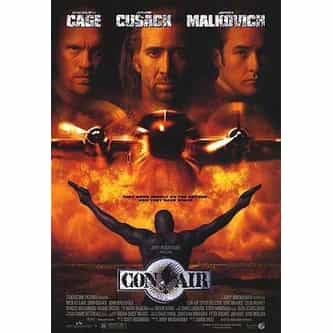 Tagline
Buckle Up!
They were deadly on the ground. Now they have wings.
One wrong flight can ruin your whole day
"The degree of civilization in a society can be judged by observing its prisoners." - Fyodor Dostoevsky.

Con Air is a 1997 American action film directed by Simon West and produced by Jerry Bruckheimer, producer of The Rock. It stars Nicolas Cage, John Cusack, and John Malkovich. The film borrows its title from the nickname of the Justice Prisoner and Alien Transportation System. While scanning a newspaper article, Screenwriter Scott Rosenberg first learned of the special program, then visited its Oklahoma City base "to get an eyewitness perspective of the incredible operation, which ... more on Wikipedia

Con Air IS LISTED ON