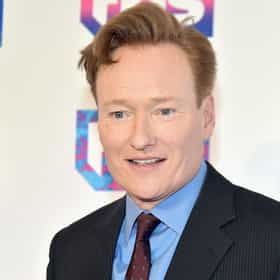 Conan Christopher O'Brien (born April 18, 1963) is an American television host, comedian, writer, and producer. He is best known for hosting several late-night talk shows; since 2010, he has hosted Conan on the cable channel TBS. Born in Brookline, Massachusetts, O'Brien was raised in an Irish Catholic family. He served as president of The Harvard Lampoon while attending Harvard University, and was a writer for the sketch comedy series Not Necessarily the News. After writing for several comedy shows in Los Angeles, he joined the writing staff of Saturday Night Live. O'Brien was a writer and producer for The Simpsons for two seasons until he was commissioned by NBC to take over David ... more on Wikipedia

Things Most People Don't Know About Conan O'Brien 3.4k views Conan O’Brien solidified his place in comedy over two decades ago, and has remained public eye for longer than many millenni...
The Very Best Conan O'Brien Quotes 313 votes Conan O'Brien quotes highlight some of the brilliant late night TV host and writer's funniest jokes. Some quotes are more ...
Conan O'Brien's Best Tweets 75.3k views This is a list of the best tweets by Conan O'Brien himself, @ConanOBrien ( www.twitter.com/conanobrien ). Since he's not l...

Conan O'Brien is ranked on...

Conan O'Brien is also found on...