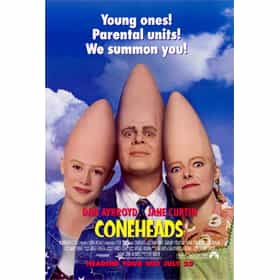 Coneheads is a 1993 American science fiction comedy film based on the Saturday Night Live sketches about the Coneheads. The film was directed by Steve Barron and produced by Lorne Michaels. It starred Dan Aykroyd and Jane Curtin as Beldar and Prymaat Clorhone, parents of Connie. The film also featured roles and cameos from a number of actors and comedians from shows such as SNL and Seinfeld. While there are some differences, the film mostly follows the same plot as an animated special that was created ten years earlier. Similarities include the Coneheads being stranded on Earth, Beldar working as an appliance repair man, and Connie dating an earthling named Ronnie. ... more on Wikipedia

Coneheads is ranked on...

Coneheads is also found on...