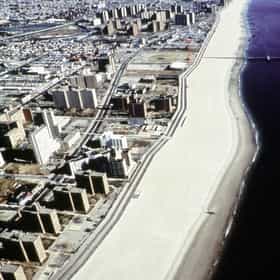 Coney Island is a peninsular residential neighborhood, beach, and leisure/entertainment destination on the Atlantic Ocean in the southwestern part of the borough of Brooklyn, New York City. The site was formerly an outer barrier island, but became partially connected to the mainland by landfill. The residential portion of the peninsula is a community of 60,000 people in its western part, with Sea Gate to its west, Brighton Beach and Manhattan Beach to its east, the Atlantic Ocean to the south, and Gravesend to the north. Coney Island is well known as the site of amusement parks and a seaside resort. The attractions reached a historical peak during the first half of the 20th century, ... more on Wikipedia

28 Historical Pictures Of New York's Famous Coney Island 2.2k views Is there anything more quintessentially American than summertime at Coney Island? If you're about to say yes and rattle off ...

Coney Island is ranked on...

#115 of 202 The Best Tourist Attractions in America 41.4k VOTES The best tourist attractions in America are the most loved and most visited places to see in the United States. Visited by m...
#25 of 28 The Best Beaches in the US 3.7k VOTES What are the best beaches in the U.S.? This list includes many of the greatest beaches and beach towns in the United States....