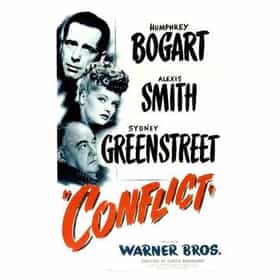 Conflict is a 1945 black-and-white suspense film noir made by Warner Brothers. It was directed by Curtis Bernhardt, produced by William Jacobs with Jack L. Warner as executive producer from a screenplay by Arthur T. Horman and Dwight Taylor, based on the story The Pentacle by Alfred Neumann and Robert Siodmak. It starred Humphrey Bogart, Alexis Smith and Sydney Greenstreet. The film is the only one in which Bogart and Greenstreet co-starred where Bogart, not Greenstreet, is the villain or corrupt character. ... more on Wikipedia

Conflict is ranked on...

Conflict is also found on...