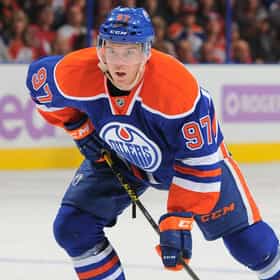 Connor McDavid (born January 13, 1997) is a Canadian professional ice hockey center and captain for the Edmonton Oilers of the National Hockey League (NHL). Considered to be the best player in the world by many colleagues and members of the news media, he was called the "most highly evolved hockey player of all-time" by The Sports Network in December 2017. Having been selected first overall by the Oilers in the 2015 NHL Entry Draft, McDavid has won the Art Ross Trophy twice as the leading scorer in the league, the Hart Memorial Trophy, given to the player judged most valuable to his team, in 2017, and the Ted Lindsay Award twice as the best player voted by other NHL players. ... more on Wikipedia

Connor McDavid is ranked on...

Connor McDavid is also found on...